Christopher Columbus was the first White European Governor of this new world.

Contemporary reports of atrocity and cruelty attributed to Christopher Columbus were mixed with reports on succeeding Governors.

Each previous Governor was cited for cruelty and mismanagement.

Some of those investigations are used by modern writers to condemn Christopher Columbus.

This is not to defend or exonerate Christopher Columbus.

But do all those investigations refer only to Christopher Columbus?

We want to separate out the reports for the historical record.

Just one source is what all the links and articles reference.

This article gives a short bio on that one author, that one source:

“…Las Casas’ monumental history remains without question the greatest single source of our knowledge of that milestone in human affairs. Born to an upper-class family in Seville, Las Casas was eighteen at the time of the voyage of discovery.

His father went with Columbus on the second voyage in 1493 and was among the first colonists on the island of Haiti, which the Spaniards called La Isla Espanola (Spanish Island).

Young Las Casas joined the colony in 1502  [ my note: travelling with Ovando] and for a time led the life of a landholder in this first Spanish settlement in the New World ….

A Landholder and Slave Owner

and for a time led the life of a landholder in this first Spanish settlement in the New World. But his sensitive mind and heart were sickened by the cruel oppression of the natives. He took the vows of the Dominican order and resolved to devote the rest of his life to their cause, a resolve he never relinquished until the end of his life, at ninety-two.

For three years he was bishop of Chiapas in southern Mexico; he then returned to Spain for the last time in 1547, becoming a permanent resident of the monastery of San Gregorio in Valladolid.

He began his Historia de las Indias in 1527, while he was still on Espanola, but did not complete it until thirty years later.

He had become well acquainted with Diego, Columbus’ legitimate son and his successor as Admiral of the Indies, and with Diego’s highborn wife, Maria de Toledo, niece of the duke of Alba.

They placed all of Columbus’ papers at his disposal, including a copy of the Journal of the First Voyage.

Las Casas made an abstract of the latter for his own use, and it remains the only detailed record of the historic voyage.

The original of the journal has been lost.

Columbus and Genocide  The discoverer of the New World was responsible for the annihilation of the peaceful Arawak Indians Edward T. Stone  October 1975  Volume 26 Issue 6 of American Heritage

was a Spanish conquistador, colonial administrator, and Knight of the Order of Calatrava. He was the second Governor of the West Indies, replacing Christopher Columbus.

As a member of the Order of Calatrava, in 1499, de Bobadilla was appointed to succeed Christopher Columbus as the second Governor of the Indies, Spain‘s new territories in the New World, by King Ferdinand and Queen Isabella.

Upon his arrival in the Colony of Santo Domingo on Hispaniola in August 1500, de Bobadilla upheld accusations of mismanagement made against Columbus, and had Columbus sent back to Spain in chains.[1]

Bobadilla also pardoned Francisco Roldán, who had revolted against the rule of Columbus’s brother Bartholomew Columbus.[2]

During his short term as governor, he canceled mining taxes in a successful attempt to stimulate gold production. But this action may have offended the crown and possibly lead to his recall to Spain. [3]

He died on 11 July [O.S. 1 July] 1502 during a hurricane that wrecked 20 vessels of the 31-ship convoy, including the flagship, El Dorado, in the Mona Passage returning to Spain. Among the surviving ships was the Aguja, the weakest ship of the convoy and which carried the gold Columbus was owed—spurring accusations that Columbus magically invoked the storm out of vengeance.[5]

was a Spanish soldier from a noble family and a Knight of the Order of Alcántara, a military order of Spain.

He was Governor of the Indies (Hispaniola) from 1502 until 1509, sent by the Spanish crown to investigate the administration of Francisco de Bobadilla and re-establish order.

His administration subdued rebellious Spaniards, and completed the brutal “pacification” of the native Taíno population of Hispaniola.[1]

Expedition to the Americas

It was the largest fleet

that had ever sailed to the New World.

The thirty ships carried around 2,500 colonists.[3] Unlike Columbus‘s earlier voyages, this group of colonists was deliberately selected to represent an organized cross-section of Spanish society. The Spanish Crown intended to develop the West Indies economically and thereby expand Spanish political, religious, and administrative influence in the region. Along with him also came Francisco Pizarro, who would later explore western South America and conquer the Inca Empire.

Another ship carried Bartolomé de las Casas, who became known as the ‘Protector of the Indians’ for exposing atrocities committed by Ovando  [Frey Nicolás de Ovando y Cáceres ]  and his subordinates.

a family acquaintance and distant relative, was supposed to sail to the Americas in this expedition, but was prevented from making the journey by an injury he sustained while hurriedly escaping from the bedroom of a married woman of Medellín.[4]

The expedition reached Santo Domingo in April 1502, and included Diego de Nicuesa and Lucas Vazquez de Ayllon. Also on board were 13 Franciscans, led by Friar Alonso de Espinar, bringing the total on the island to 25.[5] 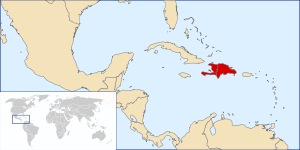 When Ovando arrived in Hispaniola in 1502, he found the once-peaceful natives in revolt. Ovando and his subordinates ruthlessly suppressed this rebellion through a series of bloody campaigns, including the Jaragua Massacre and Higüey Massacre. Ovando’s administration in Hispaniola became notorious for its cruelty toward the native Taíno. Estimates of the Taino population at the time of the arrival of the Spaniards in 1492 vary, with Anderson Córdova giving a maximum of 500,000 people inhabiting the island.[6]

By the 1507 census, according to Bartolomé de las Casas battlefield slaughter, enslavement and disease had reduced the native population to 60,000 people, and the decline continued.

In 1501, Ovando ordered the first importation of Spanish-speaking black slaves into the Americas. Many Spanish aristocrats ordered slaves to work as servants in their homes. However, most slaves were sent to work in the sugar cane fields, which produced the valuable cash crop.

After the conquests made by his lieutenants including Juan Ponce de León and Juan de Esquivel, Ovando founded several cities on Hispaniola. He also developed the mining industry, introduced the cultivation of sugar cane with plants imported from the Canary Islands, and commissioned expeditions of discovery and conquest throughout the Caribbean. Ovando allowed Spanish settlers to use the natives in forced labor, to provide food for the colonists as well as ships returning to Spain. Ovando also allowed the Taíno to be exploited for their labor, and hundreds of thousands died while forced to extract gold from the nearby mines.

Pursuant to a deathbed promise he made to his wife Queen Isabella I, King Ferdinand II of Aragon recalled Ovando to Spain in 1509 to answer for his treatment of the native people.

was appointed his successor as governor, but the Spanish Crown permitted Ovando to retain possession of the property he brought back from the Americas.

Ovando died in Spain on 29 May 1511. He was buried in the church of the former monastery of San Benito de Alcántara, which belonged to his military order and which sustained significant damage in later centuries.

he was named Governor of the Indies,

the post his father had held, arriving to Santo Domingo in July 1509.

He established his home

(Alcázar de Colón), which still stands there,  in Santo Domingo in what is now the Dominican Republic.

In 1511, a royal council declared Hispaniola, Puerto Rico, Jamaica and Cuba were under Diego’s power “by right of his father’s discovery.” However, Uraba and Veragua were deemed excluded, since the council regarded them as being discovered by Rodrigo de Bastidas. The council further confirmed Diego’s titles of Viceroy and admiral were hereditary, though honorific. Furthermore, Diego had the right to one-tenth of the net royal income. However, factions soon formed between those loyal to Diego and Ferdinand’s royal officials.

Matters deteriorated to the point that Ferdinand recalled Diego in 1514. Diego then spent the next five years in Spain “futilely pressing his claims.” Finally, in 1520, Diego’s powers were restored by Charles.[2]:143–144,148,197

Diego Columbus back in Power

Diego returned to Santo Domingo on 12 Nov. 1520 in the midst of a native revolt in the area of the Franciscan missions on the Cumana River. This was also the area of the Spanish salt and pearl trade, besides slave hunting. Diego sent Gonzalo de Ocampo on a punitive expedition with 200 men and 6 ships. Then in 1521, Diego invested in Bartolomé de las Casas‘ enterprise to settle the Cumana area. That failure, blamed on Diego, meant the loss of the king’s confidence.

The first major slave revolt in the Americas occurred in Santo Domingo during 1522, when enslaved Muslims of the Wolof nation led an uprising in the sugar plantation of admiral Don Diego Colon. Many of these insurgents managed to escape to the mountains where they formed independent maroon communities among the Tainos.

a compromise was reached in 1536 in which his son, Luis Colón de Toledo, was named Admiral of the Indies and renounced all other rights for a perpetual annuity of 10,000 ducats, the island of Jamaica as a fief, an estate of 25 square leagues on the Isthmus of Panama, then called Veragua, and the titles of Duke of Veragua and Marquess of Jamaica.

After [Diego] Columbus’s death on February 23, 1526 in Spain, the rents, offices and titles in the New World went into dispute by his descendants.

The best written description we have of him comes from his son, Fernando. Fernando describes his father as “a vigorous man, of tall stature, with blond beard and hair, clear complexion and blue eyes.”

Painted in Rome by one of the outstanding Venetian masters of the High Renaissance, this badly damaged portrait purports to show Christopher Columbus. The inscription identifies him as “the Ligurian Colombo, the first to enter by ship into the world of the Antipodes 1519,” but the writing is not entirely trustworthy and the date 1519 means that it cannot have been painted from life, as Columbus died in 1506. There are other, quite different, portraits that also claim to show Columbus. Nonetheless, from an early date our picture became the authoritative likeness. In 1814 the painting was part of the collection of Prince Talleyrand and was exhibited at the Palais Royal in Paris.

Manuel Rosa, a Portuguese historian, claims that the man who discovered America was not of Genoese origin as is commonly believed, but descended from a Polish King. Culture.pl investigates his hypothesis.