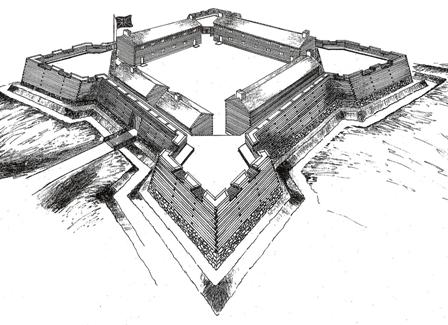 Located at 419 N. Loudoun Street, Fort Loudoun is the site of George Washington’s regimental headquarters during the French and Indian War. The only portions remaining today is the well. On-going archaeological investigations have uncovered intact period deposits including part of the barrack’s foundation as well as numerous artifacts. The Foundation plans to use the c. 1830s house now located on the property as an interpretive center.

In 1756, the Virginia House of Burgesses approved the construction of a chain of forts to defend the colony’s frontier. George Washington, Colonel of the Virginia Regiment, was the commander responsible for protecting the back country from incursions by the French and Indian allies. Washington lobbied for a “large Magazine to supply the diverse Forts with Stores.” He chose Winchester to be that site due to its strategic location.

Washington drew the plans for Fort Loudoun and supervised its construction. Built of parallel inner and outer walls 18 ft. apart at the base filled with earth and rubble, the fort was designed with four bastions, barracks for 450 men and a well sunk 103 feet through solid limestone rock to supply the fort with water. Fort Loudoun was unmatched in size along the colonial Virginia frontier that stretched from the border of Maryland to North Carolina.

During the French and Indian War there were more than 80 military and settler forts on the frontier of Virginia, extending from the Potomac River to North Carolina. Fifty-four of these forts were located within the boundaries of the original Frederick and Hampshire counties, including those now within present West Virginia. This was Virginia’s major defense line against attacks by the French and their Indian allies from the Ohio country.

Supplementing Virginia’s defense corridor north of the Potomac were the frontier forts of Maryland and the two most western forts of Pennsylvania. This resulted in a northwestern defense chain of 69 forts, a frontier extending in a 50-mile radius from the location of Fort Loudoun, Virginia’s major fortification and command center in Winchester.

This chain of forts included those built by the military, with bastions or blockhouses, the stockade dwellings or “country forts,” and the refugee dwellings of the frontier settlers. Thirteen of those forts lay within 15 miles of Winchester and provided protection, however limited, for the settlers outside the immediate defenses of Fort Loudoun. Some served as places of refuge during threats of Indian incursions and were never threatened, while others were briefly garrisoned by small numbers of soldiers from the Virginia Regiment, Rangers, or militia.

Fort Loudoun. George Washington placed his command center and concentrated his operations for Virginia’s extensive frontier chain of forts in Winchester at Fort Loudoun. It was the largest and most formidable fortification of all the Virginia forts and was constructed in the prevalent style of French and British forts. Begun in May 1756, it was still under construction in 1758 and may still have not been completed to Washington’s satisfaction by the end of hostilities. It was a square fort, built of horizontal timber and stone walls filled with earth and stone, with timber and stone bastions at each corner having flanks and faces of 25 feet and joined by curtains of 96 feet. Washington planned an armament of 24 cannon, but by mid-year 1757, he reported he had only four 12-pounders and ten 4-pounders and was hopeful of installing at least six more cannon. The site of the fort was at the present intersection of Clarke and Loudoun streets, on the most prominent elevation immediately north of the center of the small town of Winchester and the nearest water supply of Town Run. To meet the water needs, a well was dug within the fort through limestone to a depth of 103 feet. Although isolated Indian raids were made against the settlements a few miles from the fort, it was never attacked or threatened.

Pearis’ Fort. The fort nearest to Fort Loudoun, a settler’s stockade defense, probably built in late 1755, on the land of militia Captain Robert Pearis, 3.6 miles northwest of Fort Loudoun on Indian Hollow Road (Route 679), at the head spring of Parish’s (Pearis’) Run, near the intersection with Route 608. Pearis, in 1756, led a successful attack against a French and Indian war party and his fort played an active role in the operations of the Virginia Regiment.

Long Meadow's Fort. The dwelling of Robert Glass, said to have been stockaded for protection of local settlers in 1755, on the north side of the main head branch of Opequon Creek, 4.4 miles southwest of Fort Loudoun, reached from Route 621, south of the intersection with the Cedar Creek Grade (Route 622). There is no record that it was ever garrisoned by the Virginia Regiment or militia troops.

Colvill’s Fort (Fort Colvin). Located on the east bank of the main head branch of Opequon Creek, 0.7 mile south of the site of Long Meadows Fort, and 4.6 miles southwest of Fort Loudoun. The structure identified as the fort was depicted in 1751 as a spring house on the land of Thomas Marquis and John Willson and across Opequon Creek from the land of Joseph Colvill. The present structure is a stone and frame dwelling house with the spring in the cellar. An archaeological study by William and Mary in 2003 found no evidence that the structure had been used as a military fort. The springhouse may have been designated as a settler refuge under the leadership of Colvill in late 1755, following Braddock’s defeat. The structure is located one-half mile west of Route 628 at a bend in Route 621. Like its neighboring Long Meadows Fort, evidence is lacking that it was utilized by the militia or the Virginia Regiment.

White’s Fort. The dwelling of Robert White, described as surrounded by a stockade, 7.5 miles west northwest of Fort Loudoun and 3.5 miles west of Pearis’ Fort, in the community of Hayfield, Frederick County, near the mouth of White’s Run on the west bank of Hogue Creek. Indians attacked the settlers in the vicinity of the fort during Pontiac’s War in 1763 and 1764. The site of the fort is near the intersection of Route 600 and Route 615, south of Highway 50.

Smith’s Fort. Ten miles northwest of Fort Loudoun, on the west bank of Back Creek, in the present community of Gore, stands the dwelling of militia Captain Jeremiah Smith. Possibly enclosed by a stockade, this settler’s fort served as an encampment and storage facility for the Virginia Regiment. Captain Smith led a force of 20 volunteers from this fort in the spring of 1756, defeating a French-led Indian war party at the head of the Great Cacapon River. The site is alongside the original road from Fort Loudoun to the South Branch of the Potomac (present Route 750), south of present Highway 50.

Froman’s Fort. A stockade stone dwelling fort at the settlement of William Froman on the banks of Cedar Creek, one of a chain of forts along the creek. It is less than one mile east of Fry’s Fort and 1.15 miles north of Stephens’ Fort.

Stephens’ Fort. A stockade dwelling fort at the settlement of militia Captain Lewis Stephens on the northwest side of Cedar Creek, at the crossing of the road (present Route 628) near the mouth of Stephens Mill Branch (present Fawcett’s Run). The site of the fort is 11.5 miles southwest of Fort Loudoun in the present community of Marlboro. It was one of a chain of five settler forts on Cedar Creek. In the fall of 1757, George Washington sent a detachment of soldiers from Fort Loudoun to garrison Stephens’ Fort after an Indian raid in the area killed or captured 34 settlers.

Fry’s Fort. Benjamin Fry settled in 1744 on 500 acres of land on both sides of Cedar Creek, 11.7 miles southwest of Fort Loudoun and about 2 miles northwest of Stephens’ Fort. During the French and Indian War, Fry would fortify his stone dwelling on the south side of the creek. Forty-six settlers from the Great Cacapon River fled to the fort in September 1757, shortly after 34 inhabitants had been killed or captured between Cedar Creek and Stony Creek. In 1758, Benajmin’s son, Ensign Samuel Fry, was in command of 25 Rangers operating between Stephens’ Fort area south to below Mill Creek to Holman’s Fort, near the present community of Rude’s Hill. Fry’s house still stands between Cedar Creek and Route 606 (Mountain Falls Road), a short distance west of its intersection with Route 623.

Nisewanger’s Fort. A small stone settler’s dwelling, designated a refuge at the settlement of John Nisewanger, on Middle Marsh Run which flows into Cedar Creek, 12 miles southwest of Fort Loudoun, and 2.6 miles southeast of Stephens’ Fort. It was one of the five settler forts along the Cedar Creek corridor. Apparently acquiring its identification as a shelter for local settlers during times of incursions, there is no evidence of troop utilization. The fort site is located about one-fourth mile south of Route 627 about 1.5 miles northwest of Middletown.

Cunningham’s Fort. Robert Cunningham’s settler’s fort was located alongside the Indian War Path (present Highway 11), 12 miles north of Fort Loudoun, at the Indian Path’s crossing of Mill Creek in the present community of Bunker Hill, West Virginia. Probably a stockade dwelling fort, Cunningham’s Fort was on land acquired by Cunningham in 1750. Indians attacked within five miles of the fort in April 1756. Again, in June 1757, George Washington reported that Indians captured three children near the fort.

Baldwin’s Fort. This country fort included the two-story log dwelling of William Baldwin at a strategic location, 2 miles east of Mills Gap and 1.3 miles northeast of Gerrardstown, West Virginia, 13.5 miles north of Fort Loudoun. Baldwin built on the west side of an ancient Indian path (County Road 24), 0.9 mile north of the path’s intersection with Highway 51 which passes over Mills Gap. The Mills Gap passage was a major artery for Indian incursions into the settlements. Baldwin’s Fort was 1.1 miles east of Bell’s Fort, also under Mills Gap, and 5.1 miles south of Patterson’s Fort. Troops of the Virginia Regiment were garrisoned at the fort in 1757.

Bell’s Fort. Nathaniel Bell settled under Mills Gap in the present community of Gerrardstown, West Virginia, in the early 1750s, on the eve of the French and Indian War. Bell’s dwelling would be converted into a stockade fort for protection of the local settlers. In 1757, George Washington would station a small number of troops from the Virginia Regiment at the fort. At the site stands an old stone and frame dwelling, 0.1 mile west of the present Union Corner Road and 0.85 mile north of present Highway 51, the road over Mills Gap, only 0.9 mile to the west. Bell’s Fort was 13.5 miles north of Fort Loudoun.

Bowman’s Fort. One of the five settler refugee structures on Cedar Creek, George Bowman converted for a time his limestone dwelling into a stockade fort for the protection of local settlers, the most southern of the Cedar Creek fortifications. The dwelling, which still stands, is 15.5 miles south of Fort Loudoun, 3.5 miles from Nisewanger’s Fort, 5.3 miles from Stephens’ Fort, 6.35 miles from Froman’s Fort, and 6.75 miles from Fry’s Fort, straight-line distances. The Indians attacked the area near Bowman’s Fort during Pontiac’s War, killing the family of a Bowman neighbor, George Miller, and killed another neighbor, John Dellinger, while taking Dellinger’s wife and an infant captive.